Dharma Friendship Foundation is a non-profit, 501(c)3 volunteer-run organization. DFF is funded primarily through the generosity of our contributors and monthly supporters, and by dana (donations) given for teachings. DFF is operated entirely by volunteers who serve on the Board of Directors and/or help with special events.  We thank everyone who in their way helps bring the Dharma to the hearts of sentient beings.

We seek to realize the path of peace, nonviolence and compassion as we grapple with the complex issues of our time and support one another in applying Buddhist teachings meaningfully in the world.

For over 35 years, Dharma Friendship Foundation has held space for individuals wishing to explore the liberating wisdom and skillful means of Buddhist teachings. Our community is based in the Seattle area on the traditional homeland of the coast Salish people, though our connections are global via our online library of transcripts, videos and events hosted online. These are extraordinary times we are living through: a global pandemic and an increasingly urgent climate crisis compounded by daily reminders of injustice in racial, economic, social, and other spheres of modern life. At DFF, we embrace these challenges in all their complexity, as opportunities to deepen our practice through wise reflection, conversation, and compassionate engagement.  We invite and welcome your participation in our spaces – in person as public health allows, and online.  Thank you for your practice.

Under the guidance of Alan Wallace, DFF was founded in Seattle in 1985 in order to make it possible for Gen Lamrimpa to come and teach in the USA for an extended period of time. Born in Tibet in 1934, Gen Lamrimpa became a refugee in India after the 1959 abortive uprising against Communist Chinese rule in Tibet. Gen Lamrimpa was known as an accomplished meditator and a true yogi, although, like all genuine masters, he remained humble and unostentatious. For many years before coming to Seattle he meditated in a stone and mud hut in the mountains above Dharamsala, India. Once in Seattle, he led a one-year samatha retreat at Cloud Mountain Retreat Center, providing earnest Western practitioners the possibility to practice under his guidance. His book Calming the Mind (Snow Lion Publications, Ithaca New York), first published as Samatha Meditation, is the record of some of the teachings he gave during this time. After teaching in the U.S. for two years, Gen Lamrimpa returned to Dharamsala to continue his practice. He came back to Seattle to teach in late 1992 for several months before returning to India. “Gen la” passed away in meditation in 2004. 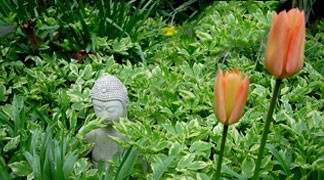 In 1992, Venerable Thubten Chodron accepted the DFF Board’s request to be our resident teacher and spiritual advisor. In 2002, Ven. Chodron moved from Seattle in order to begin Sravasti Abbey, an abbey for nuns, monks, and laypeople. She continued to function as the Spiritual Adviser of DFF until September 2005, when with her blessing and encouragement, the Board of DFF formally requested Yangsi Rinpoche to be our new spiritual adviser.

From 2005 to the present, Yangsi Rinpoche has guided DFF, generously offering public teachings and empowerments as well as an annual two-week Mahamudra retreat. Much as Atisha brought the pure Dharma teachings from India to Tibet in the eleventh century, Rinpoche has worked closely with the DFF Board and the broader community, to continue the task of planting the Dharma in American soil, and in the hearts of its people.